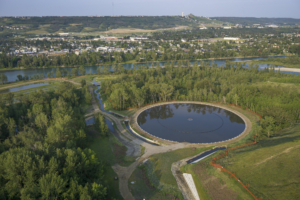 Dale Hodges Park is at once a stormwater facility, a public park and an art installation.

That threefold purpose was born out of the City of Calgary’s WATERSHED+ program, which brings together planners from Parks and Water Resources as well as artists from Public Art.

“The idea was that artists would help create an emotional connection between citizens and their watershed,” he says.

The park, named after a longtime Calgary city councillor, is designed as green space where residents can go to see the treatment process of stormwater. Prior to its completion in 2018, stormwater from eight communities — an estimated 10 percent of the city total — traveled through the area and dumped untreated, pollutant-filled water Into the city’s main river.

At the park, the Nautilus pond slows down waterflow through a spiral to deposit larger sediments before falling through the centre, referred to as the “halo drain.” The water then snakes its way through a “treatment train” of floating weed beds before being deposited in the Bow River.

The park is also a work of restoration. Cottonwood trees, tailored to riparian areas, were planted at the site and the surrounding forest is expected to close in over the coming decades. Some wildlife has already taken root in the new habitat.

Stormwater processes are typically hidden underground but for a main pond. The visibility at Dale Hodges Park invites viewers to consider the relationship between the city and the environment.

“But they’ll also create natural habitats entering the water, combining these elements and making that manmade infrastructure needed for being able to live in a city visible.”

Blanc and Surtees are quick to point out the collaborative nature of the project as one of its strengths. Among those involved were AECOM, O2 Planning + Design, Source2Source and Wilco Contractors Southwest.

“There’s so much richness when we talk to each other and work outside of silos and expected bubbles of work,” Blanc says.

“And public art can help facilitate that.”