The Emerald Documentary Series features the 2019 Emerald recipients each in their own documentary short. The series is produced by the Alberta Emerald Foundation and created by Hoopla Media.

The Battle River Watershed Alliance (BRWA) has a focus that extends far beyond just its lakes and rivers. The non-profit develops innovative ways for the public to connect with broader issues that impact its watershed region. In 2017, the BRWA created a government-sponsored project with three distinct parts: The Finding Common Ground bike tour, documentary film, and community conversation series.

After assessing how to improve its stewardship of land use and management, the City of Edmonton drew on the province’s experience to create its own “urban Primary Vegetation and Land Inventory” (uPLVI). Edmonton’s uPLVI project’s compatibility with the provincial PLVI system paints a broader picture of the region’s natural assets. The data can be used to track how municipal greenhouse gas emission levels are being impacted by land-use change.

Whether the College “Hunks” are helping a family downsize, decluttering an office, or removing debris from a construction site, over 80% of all items are recycled or donated to partner non-profits or disposed of with as little impact on the environment as possible. This gives environmentally savvy customers peace of mind about where their “junk” is going, without the stress of having to sort and haul it all themselves.

The Goodwill Impact Centre opened its doors in 2017 and illustrates how this non-profit organization is taking its commitment to reusing, repurposing, and recycling to another level. Overlooked treasures from their Edmonton region thrift stores are sent to the GIC outlet, where DIYers, bargainistas, and upcyclers pay by the pound or at discounted prices. In 2018, Goodwill Industries of Alberta diverted over 13 million kilograms from local landfills, an increase of 3% in one year. 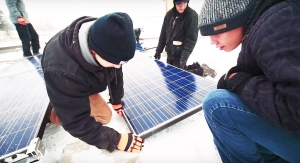 At the time of filming, the Indigenous Electricity Technical Working Group was unable to participate in the Emerald Documentary Series. Learn more about their amazing achievements and check out their study guide!

After working in a sawmill in BC, Lloyd Dahl began a lengthy career with what later became Corrections Canada. He noticed that inmates who worked on campgrounds in wilderness areas and park trails throughout BC gained self-esteem, improved mental health, and had a greater sense of responsibility. Lloyd went on to oversee similar parks and wilderness projects throughout the Northwest Territories and Alberta, having a hand in the creation of 22 natural areas in western Canada.

Sustainable Produce Urban Delivery (SPUD) sources and delivers local groceries to their customer’s doorsteps. Since expanding to Alberta in 2005, the company has modelled how a social enterprise can “change the world, one bite at a time”. Part of SPUD’s commitment to sustainability has been to model how food waste can be minimized in innovative ways.

The Land Reclamation International Graduate School (LRIGS) stands alone as the only school of its kind in the world. The breadth of course work provides students with a well-rounded perspective on the social, economic, and ethical aspects of land reclamation along with the latest scientific and technological advances in the field.