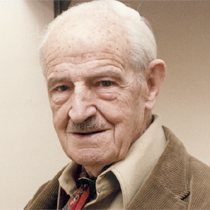 “I can’t think of any service today, or in any time in world history where it’s more crucial; I can’t think of any service that I can give – if I can give anything at all – that exceeds the care of those natural resources; those natural treasures upon which the race, the human race; the race of others of God’s children, depend.”
Grant MacEwan (1902 – 2000)

Over the past months we have been preparing for the upcoming 25th Annual Emerald Awards which will be held on June 8 at Telus Spark in Calgary. While welcoming this year’s 32 finalists to a quarter-century legacy of recognizing and celebrating Alberta’s EcoHeroes, we have also reconnected with our past recipients, and dove deep into our archives. It has been a truly special time for our Foundation as we reflected on the positive environmental impact made by the many people we have connected with over the years.

In a recent meeting with one of our founding board members, Ron Kruhlak, he passed us a speech that was delivered at our second Emerald Awards by one of Alberta’s most highly-regarded people, Grant MacEwan. We were moved by how his words were as relevant today as they were more than two decades ago. We’re pleased to share an excerpt of his inspiring speech here.

Remarks from Grant MacEwan from the Second Annual Emerald Awards

“I’m very proud to be here. There’s some pretty good political meetings on in Alberta tonight. There’s a pretty good hockey game on in Los Angeles tonight. But I can say from my heart, there’s no place in God’s world I’d rather be than right here with the big aggregation of people who are declared conservationists and environmentalists. I think that this country has been waiting for a movement like this, and I compliment those who are the founders of an organization that is still just in its second year.

Some said that cleanliness was next to Godliness. I was never very clean and I had a little difficulty understanding that. But I interjected. I said in my opinion, conservation IS godliness.

And as I grow older – and I don’t know how much longer I’m going to go in that direction – but as I became older, I became more and more convinced that there’s no better way for me to serve my God than in trying to be one of his useful caretakers. I can’t think of any service today, or in any time in world history where it’s more crucial; I can’t think of any service that I can give – if I can give anything at all – that exceeds the care of those natural resources; those natural treasures upon which the race, the human race; the race of others of God’s children, depend. I think I’d like to think, that we would see conservation and environmentalism more and more as spiritual challenges. They are for me and I’m proud to say they have been for a long time.

I used to think that there was a practical aspect to conservation and a spiritual aspect I believe today that the two have drawn closer together; that they are one and the same thing. And I think that there’s a movement among the younger people of Canada to take that view of the challenge to be a caretaker – a good caretaker – of soil and water and air and trees and birds and animals and iron ore and oil and…well, where does it end? We talk about peace on earth. Yes, but what does that mean? Let’s think about peace on earth as attempt to bring a degree of harmony, Godly love, between man and man; between man and animals; between man and soil; man and trees; man and birds; man and water.” – Grant MacEwan, June 1, 1993.