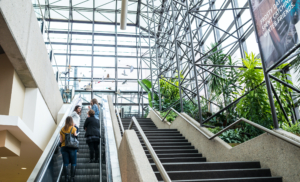 For more than a decade, sustainability has been a focus at the Edmonton Convention Centre (ECC).

The 150,000 square foot convention centre hosts over 500 events and serves 250,000 meals in an average year. The complex nestled in Edmonton’s river valley is a city-owned not-for-profit — a model that helps drive its environmental goals, according to the centre’s sustainability manager.

“It allows us to do a lot of this work,” Melissa Radu says. “Which otherwise wouldn’t be possible if we were just kind of driving for that bottom line profitability above all.”

Radu says the centre started sorting compostables in the mid-2000s. Sustainability has since become one of the centre’s four strategic brand pillars, guided by a sustainability committee made up of 12 members from across the venue.

“It’s important for us that we get feedback from every level of the organization and that those decisions are collaboratively made,” Radu says.

One major initiative was the launch of the Responsible Meetings Program in 2019, which incentivizes clients to eliminate single-use plastics, donate to the food bank, purchase carbon off-sets and conduct post-event reporting.

It also encourages choosing from the ECC’s newly-developed plant-based menu.

“For a convention centre in the middle of Alberta — like, beef country — to launch a 100 percent plant-based menu was a really, really bold thing to do,” says Radu.

The ECC is aiming for a 30 per cent reduction of its greenhouse gas emissions by 2035. It recently completed a building-integrated solar installation — the biggest of its kind in Canada, Radu says.

The centre also claimed a 28 per cent reduction in waste for 2019 after it installed new Front of House compost bins with comprehensive signage.

That kind of awareness is something ECC aims to pass on through its community education and engagement program, where groups will tour the facility and its initiatives.

“I hope that the work that we’re doing, it can be inspirational in nature,” says Radu. “And that people can kind of look to us and say, ‘Here’s some learnings and I can potentially take from that.’”