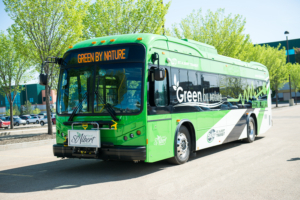 In 2017, St. Albert became the first municipality in Canada to own a fleet of long-range electric buses.

Mayor Cathy Heron, who served as a councillor from 2009 until being elected mayor in 2017, says the move fits in with residents’ concerns for the environment.

“They would have pushed us if we hadn’t gone down this road,” she says.

The city first piloted electric bus programs in 2014 and 2015. It took the leap in 2017 with the purchase of three BYD K9 battery-powered buses, assisted by funding from the province. A year later, it added four more of the 35-foot buses to the fleet with provincial and federal assistance.

“I think what it says is in order to help the environment, in order to make those positive impacts, you kind of have to be willing to take the risk of that first step,” Heron says.

The battery-powered buses can run up to 284 km or 10 hours on a single charge and are quieter than their diesel counterparts. Over an 18 year lifecycle, they’re expected to save the city $386,000 in fuel and maintenance costs.

The savings are also environmental. The buses produce 51 per cent less emissions than the diesel ones, calculated based on the consumption of electricity produced through coal.

“We realized very quickly that we were plugging them in every night and charging them off of a grid that in Alberta is not as clean as it could be,” Heron says.

To minimize the environmental impact, the city installed a 301-kilowatt solar panel system that supplies around one third of the transit depot’s power and is used to help charge the buses.

Heron says the long-term plan is to replace the public transit fleet entirely with the green coaches, depending on funding support.

“People do prefer them,” she says. “There will be a demand that we continue to bring them into our fleet.”