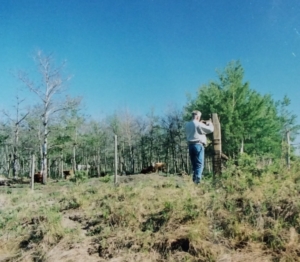 The Viking Bluebird Trail numbers more than 1200 nest boxes and stretches along 275 miles of road in Beaver County.

Pres Winter started the massive bluebird trail in 1977 with just 200 nest boxes given to him by the then-director of John Janzen Nature Centre. At 79 years old, he still tends and bands baby birds with no intention of missing the next season in 2021.

“I’m excited to begin my 44th year of working to provide nest sites for these beautiful birds,” he says.

Bluebirds are secondary cavity nesters, which means they do not build their own nests. In the pre-colonial past, Winter says, they would take over the abandoned nests of woodpeckers. But with the clear-cutting of forests to make way for agricultural development, the woodpecker population diminished and the bluebirds with them.

In the 1960s, non-governmental grassroots efforts started popping up around North America to set up bluebird trails to restore the bird population. Winter, who ran a pharmacy in Viking before he retired, was given an article by a local teacher about the movement — he started his trail the same year.

“Through that time, I had never seen a bluebird in our area,” he says. In the first year, Winter counted 14 pairs of mountain bluebirds. In 1978, he added another 100 nest boxes and counted 67 pairs.

Pres estimates he spends about 490 hours out in the field in the spring and summer. In the early years, his children would help out.

“I like to say that they pretty well learned how to drive the truck on the roads of the bluebird trail,” he says.

They’ve since left the nest but Winter sometimes does get some help from a few volunteers.

“It’s been one of the loves of my life,” he says. “So if you’re looking for an interesting hobby, volunteer as a helper on a bluebird trail.”