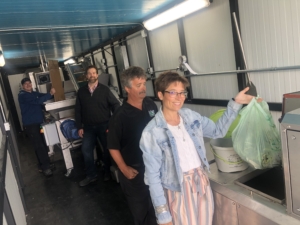 Glen Smith remembers the night Eco-Growth Environmental first tested its biomass dehydrator. Employees loaded up around two hundred pounds of food waste and left for home in the wee hours of the morning.

“We weren’t sure if this was going to burn the building down or anything like that,” the company’s vice-president and director recalls.

Fortunately for the building, it was a success. The processor turned the waste into a dehydrated biomass, shrinking its volume by around 80 per cent. Eco-Growth has also designed a specialty boiler that can be fueled by the biomass, which Smith says burns at around 8600 to 9000 British Thermal Units per pound — higher than the typical 7000 BTUs of wood.

In 2018, Eco-Growth started working with the Surmont Operations Waste and Liability Strategy committee to implement a food waste diversion program at the ConocoPhillips bitumen recovery facility in Surmont. Eco-Growth technology turns around 385 kilograms of raw waste, including food, organics, paper and grease, into 77 kilograms of biomass every day. It’s then used as part of an industrial process to soak up hydrocarbons at the plant.

“Instead of buying sawdust and stuff like that they’re using their waste stream to do the same job,” says Smith, adding that the idea originated with the team at the plant itself.

Eco-Growth was founded in 2013 by Kim Caron. In 2012, his hazardous towel to green energy technology with Executive Mat Service — an industrial laundry that removes hydrocarbons out of oily rags to be used as fuel — was recognized with an Emerald Award for small businesses.

Smith says the company has a number of projects on the go to further develop new ways to convert waste to green fuel.

“We want to build technology that betters the world,” he says.