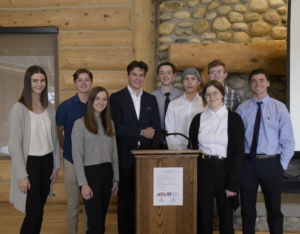 The first iteration of the student-run club raised close to $50,000 and installed the first set of solar panels on the school’s roof.

Over the years, the committee has done community outreach and campaigned for environmentally-friendly technology in a bid to make sustainability a reality in their school and town.

“They’re more than students, they’re young adults that just want to come in here and shake things up,” Bennett says.

For Travis Price, it’s been a bit of a family legacy — his older sister first brought him into the club when he was in Grade 10.

“At the beginning when we first started the project, I had no experience public speaking, no nothing.”

That would soon change through the 18 months of “Phase Nine” as the group of about eight high school students visited nearby businesses to try to raise funding for a new solar rooftop array. The committee was even invited to town hall to speak to local developers and give updates on the project.

“We’ve been given quite a great opportunity with it to interact with the adult world more than most, I feel, in high school,” says Emilio Spagnolo, another member of the committee.

Phase Nine eventually reached its $100,000 goal following an adopt-a-panel campaign. In the spring of 2019, the 50.05 kilowatt voltaic system was installed and is expected to offset the school’s electrical consumption by 8.3%.

“It’s really kind of helped us visualize in a way and understand more about not only what the issue is, but what the solution can be,” says Emilio.

Emilio and Travis will take the lessons they’ve learned with them as they start university next year. At Cochrane High, a new committee will take their place.